We are witnesses of an exponential increase – explosion – of our knowledge about ourselves, about our origin and about the substance we are made of. No sooner we have completely recognized our structure, than we are starting to change it. There is still a lot to learn about the mechanisms shaping the quality and length of our lives, but we start to edit our DNA and our future as well.  The  dreams of  ancient alchemists about the  transmutation  of  base metals into  noble ones have come true, and now
their panacea curing any disease and even their dreamed elixir of immortality are becoming nearly reality. Below are several milestones, from the last three hundred years, on our road to almost eternity.
1828 Friedrich Wöhler synthesized organic material urea from inorganic ammonium cyanate, thereby disproving the vitalism theory – the belief that the organic matter could be formed only in the live organisms owing to their special vital force 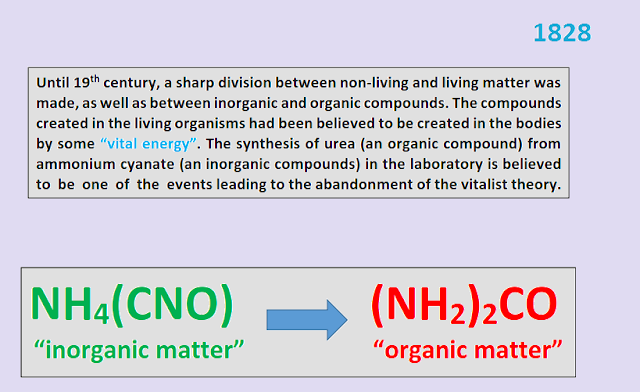 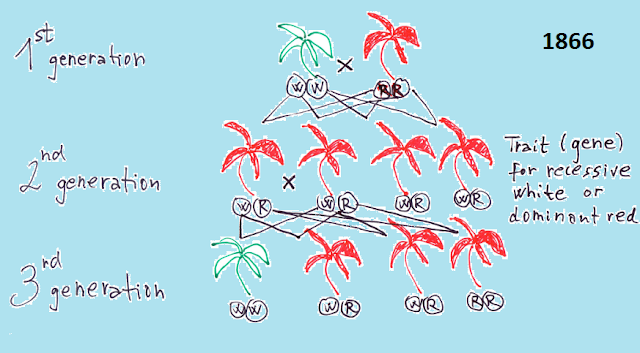 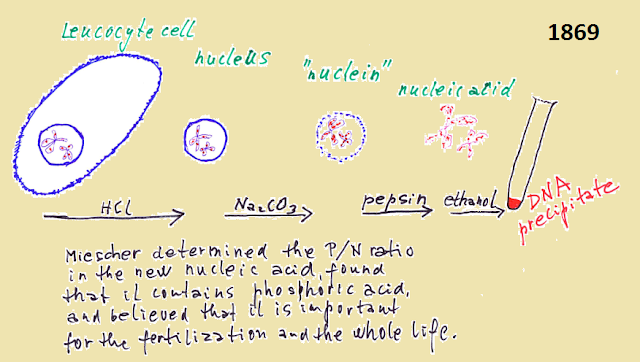 1919 Phoebus Levene identified nucleic acids components (ATGC) and their chemical structure, and named them nucleotides, he distinguished two types of nucleic acids, RNA (ribonucleic) and DNA (deoxyribonucleic). Undeservedly he is remembered mainly for his incorrect assumption that the nucleotides are linked in DNA equimolar ratios, and strangely he did not get a Nobel Prize 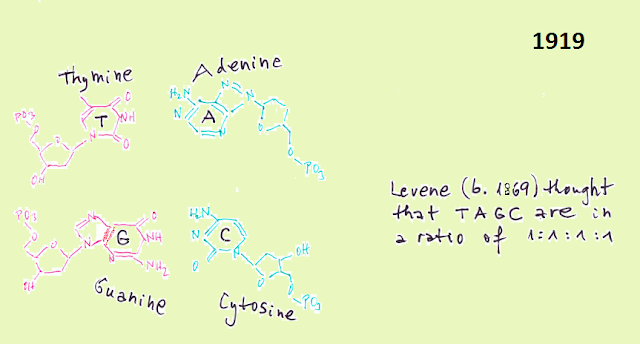 1952 Martha Chase and Alfred Hershey (Nobel Prize, NP, 1969) confirmed that DNA is the genetic material and not proteins or other materials 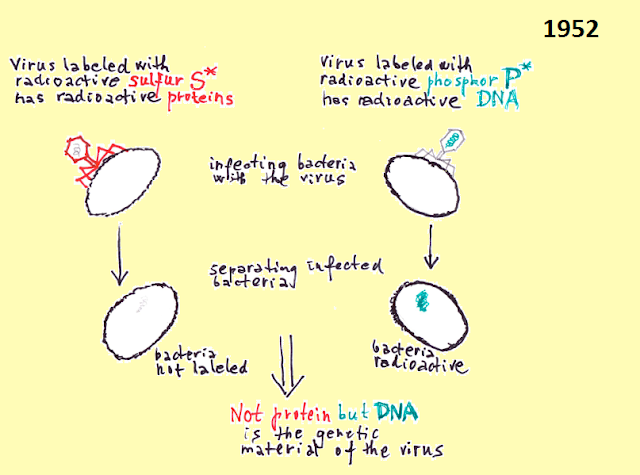 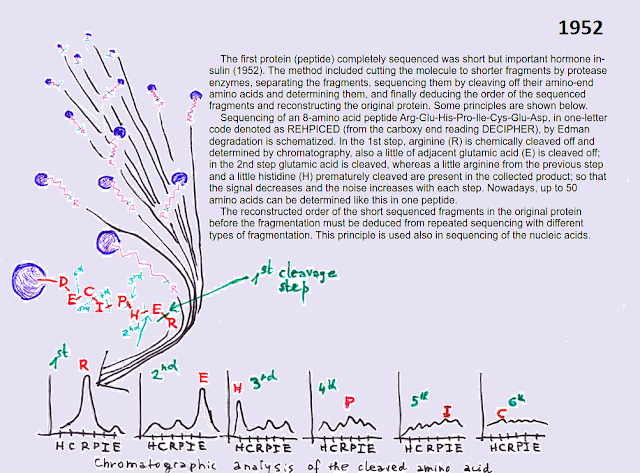 1953 James Watson (NP 1962) and Francis Crick (NP 1962) disclosed the double helix structure of DNA made of two reversely oriented (5’→3’ and 3’→5’) complementary strands, G and C in the opposite strands being bound by three hydrogen bonds, A and T with by two hydrogen bonds 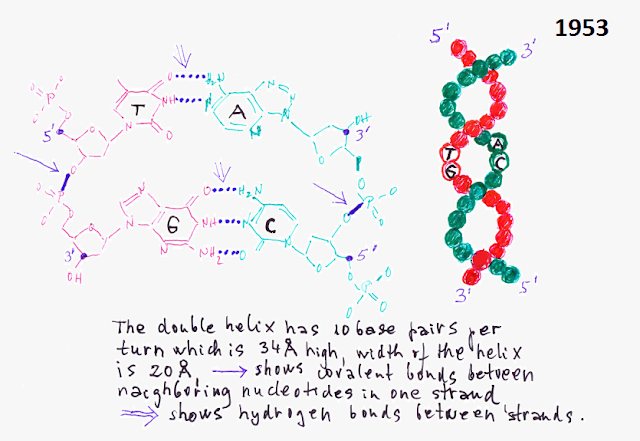 1961 Genetic code was deciphered within 1961-1965 by Marshall Nirenberg (NP 1968), Heinrich Matthaei, Severo Ochoa (NP 1959), Gobind Khorana (NP 1968), Robert Holley (NP 1968) and Philip Leder, showing that each of the 64 nucleotide triplets (codons) represents one of 20 naturally occurring amino acids or a stop signal in the process of translating the nucleotide sequence of the nucleic acids into the amino acid sequence of the proteins, the process occurring on the ribosomes in all cells on Earth 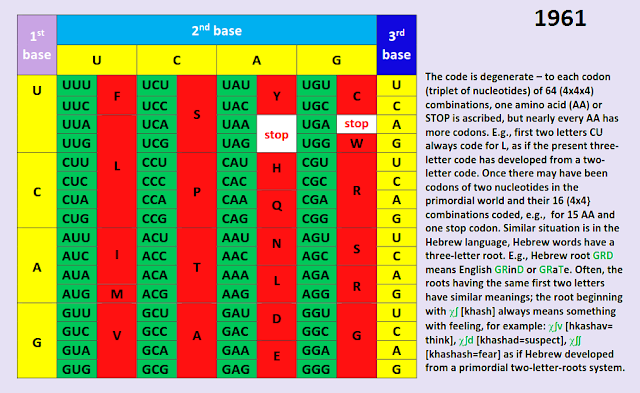 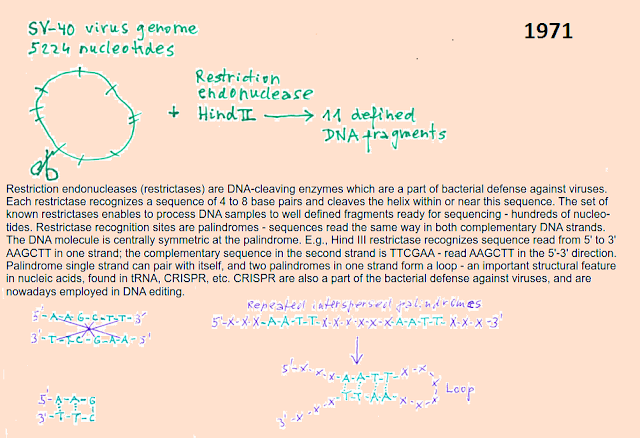 1977 Frederic Sanger (Second NP 1980) et al. determined the sequence of nucleotides in the whole genome of fX174 virus having 5386 nucleotides after cutting the molecule to defined oligonucleotide pieces by restrictases, separating the pieces and sequencing them, and deducing their order in the viral genome 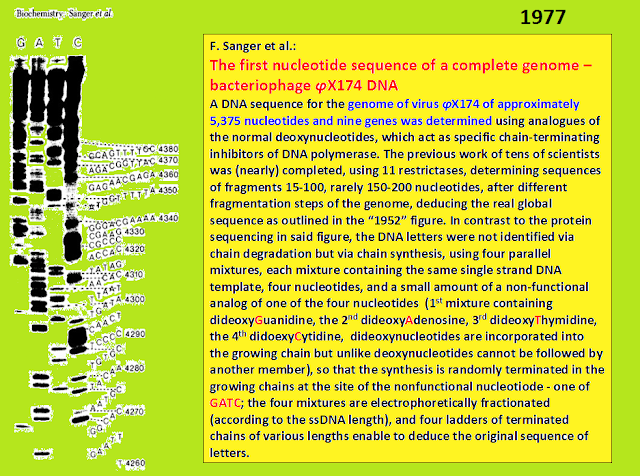 1983 Jack Szostak (NP 2009) and many others found the importance of DNA double strand breaks in DNA repair and its potential for artificial DNA modifications within 1983 to 2012, including techniques of meganucleases, ZFN, TALEN, and CRISPR

2001 The human genome was published, haploid 23 chromosomes, 3.2 billion nucleotides in each strand 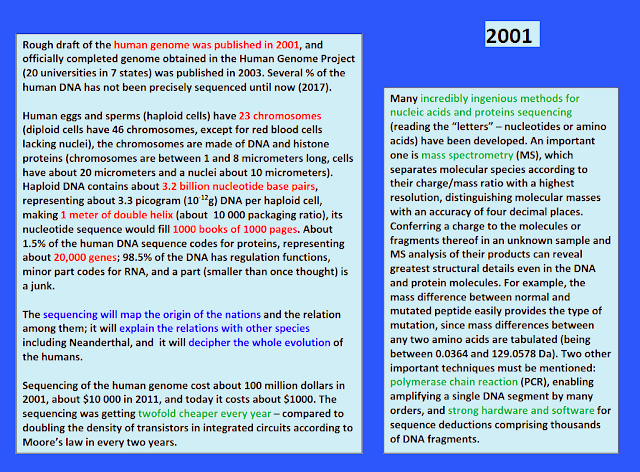 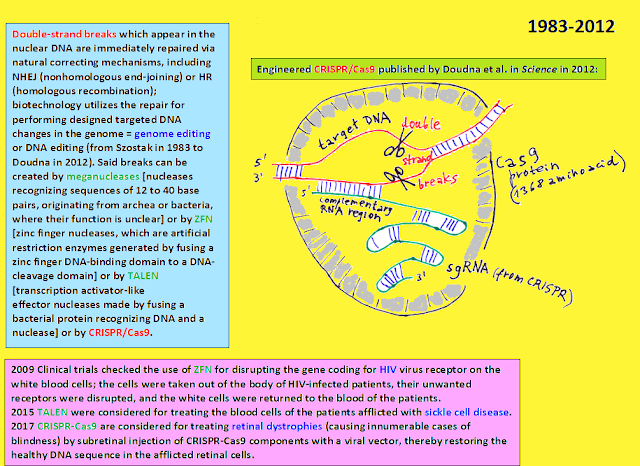 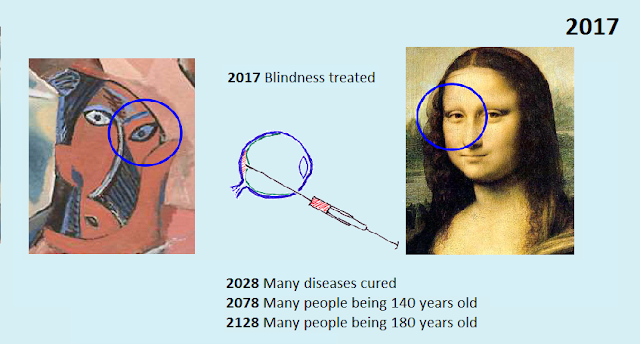 2128 The humans – products of the evolution – together with robots will take full control over the evolution of nearly all species on Earth
Email ThisBlogThis!Share to TwitterShare to FacebookShare to Pinterest