The numbers of diseased and deceased with corona to a certain date can be found in the WHO website, and the numbers of performed tests in the WORLDOMETER site. In the following table, I have extracted the data for April 14 and adjusted them to reflect the population size for the majority of East Asian, West European, and North American countries. The table comprises the numbers of reported positive cases, death, and performed tests, as well as these values recalculated per 10 million people, which is an approximate population of Sweden, Portugal, Czechia, Hungary, Greece, Austria, Israel, Switzerland, and Hong Kong. 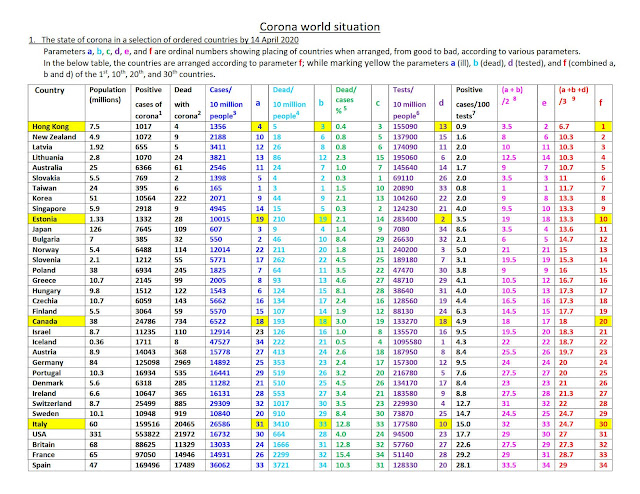 The developing or totalitarian countries do not measure or do not provide real data. A sample of such countries is exemplified in the following table.

It can be supposed that the rating will not much change in the near future even when comprising updated data.

For some reasons, the countries of Eastern Asia and Eastern Europe have less infected and dead than their Western counterparts.
Email ThisBlogThis!Share to TwitterShare to FacebookShare to Pinterest